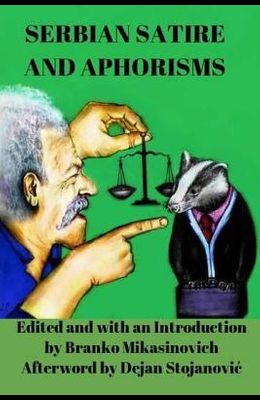 An Anthology of Serbian Satire and Aphorisms Between 1950 and 1990, satire contributed the most to the democratization of society in the former Yugoslavia and Serbia. Cabaret performances, The Alarm-Clock by Vlada Bulatovic Vib; The Tavern, The Court, The Mad House by Brana Crncevic or Marx, Marx, What Time Is It? by Milovan Vitezovic played a large role in the process. In 1969 Vitezovic's book, My Heart Betrayed Me, was burned. In addition, Matija Beckovic, primarily a poet, had both the courage (considering that he lived in communist Yugoslavia) and the talent to write such provocative texts as On Yugoslavs and On Success and Failure. Writings of this nature were generally considered heresy, to put it mildly, and could have led to censorship, ostracism, or imprisonment. Under the influence of the great Polish aphorist and poet Stanislaw Jerzy Lec and later under the influence of Brana Crncevic and Milovan Vitezovic, the world-renowned Belgrade Aphoristic Circle was formed. Aphorisms were heavily used in the last decades of the 20th century in Serbia without slowing down in the 21st century. It is a miserable democracy when people have to choose between two evils, wrote Vitezovic four decades ago. These words are equally fresh and alive today, regardless of where one stands along the political spectrum. The form of satirical aphorism culminated under the pen of Vitezovic in the earlier decades and more recently under the pen of Aleksandar Baljak and Aleksandar Cotric, to name a few. Our native land is in danger. From the saviors, says Cotric, and this is the critique or social function of satire at its best. The absurdity of the situation and the use of paradox by satirists led to the best results in their works. Strangeness in literature is a quality regardless of form or genre, but in satire, strange or grotesque situations create a much stronger message. In a story titled, Letter from 1920, Andric wrote that most evil and dark people can be seen around shrines, monasteries and mosques. Humor is not present in this sonorous statement, yet the tone and message are piercingly satirical. In his essay Laughter, Henri Bergson rightfully argues that, when people are found in unusual situations, it triggers laughter. For example, somebody walks down the street and for no obvious reason falls down in a grotesque way, so that passersby start laughing immediately. The peculiarity of this scene lies in the fact that it is not usual that a person walking down the street falls for no obvious reason. People who laugh in such situations react mechanically. Although comedies or humorous literary works are not necessarily satiric, many satirical plays and novels or stories are humorous. Humor in literature is most effective if it contains the elements similar to the situation described in the Bergson's essay. Strangeness, absurdity, paradox, and hyperbole make satire more appealing, effective, and clear in its message. All these elements were employed by Petar Kocic in his play A Badger in Court. We can hardly imagine a stranger situation than a person suing a badger and bringing it to court to seek justice. From the first stories of Domanovic and Kocic, Serbian satire moved on to an adventurous journey full of creativity and surprises that led to improvement and artistic invention along a wide spectrum of artistic forms and mediums. One of the most popular and fruitful forms was aphorism, in which Serbian authors achieved the highest points even on the world scene. Today, there is no immediate danger for the satirical writers in Serbia since society has changed and democratized and not much courage is needed to write about any subject. Still, this journey not only continues in the 21st century but is equally productive, thought-provoking, and adventurous. -Dejan Stojanovic