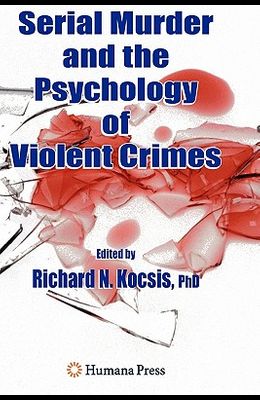 Serial Murder and the Psychology of Violent Crimes

The 21ST CENTURY: THE AGE OF SERIAL VIOLENT CRIME Despite technological and societal advances, crimes of an inexplicably violent nature still permeate contemporary civilizations throughout the world. The very existence of such aberrations, despite the passage of time over the centuries and the supposed evolution of our societies, suggests that some of the most basic instincts inherent to humanity may fundamentally relate to its proclivity for violence. Far from being manifestations of the modern era, serial violent crimes bear an uncanny resemblance to a number of ancient mythological creatures. These similarities raise suggestions that such creatures may have been attempts by ancient cultures to account for the abhorrent crimes. A series of seemingly unrelated brutal murders featuring the excessive mutilation of victims, with indications of body parts having been consumed and/or blood having been drunk, provided inspiration for folklore creatures such as werewolves or vampires. Similarly, the demonic spirits known as incubi that would rape women may be the ancient world seeking to account for serial rapists. Moving beyond these mythological examples, identifiable vignettes of serial violent crimes can be found in history, such as the Roman emperor Nero, who is well chronicled for his madness and delight in starting fires. Serial violent crimes in contemporary society no longer typically invoke any relation with the supernatural but are, instead, now more notionally explained by labels such as serial murder, serial rape, or serial arson

From the Back Cover The phenomena of serial violent crime has long plagued human civilizations. Far from being a contemporary notion unique to Western societies, serial murderers and other offenders who repeatedly engage in violent crimes such as rape or arson are examples of extreme criminal aberrations that exist in cultures around the world. This book assembles the collective expertise of an international group of scholars and practitioners who seek to explain the psychiatric, psychological and criminological factors that may account for the perpetration of these abhorrent crimes. The topics covered in this text examine the motivational dynamics of offenders including such dimensions as their apparent behavioral normalcy, sensational interests, sadism, narcissism, commonalties, gender and age patterns. Beyond psychological and etiological factors the topics encompassed by this book also consider investigative techniques, procedures, limitations and failures encountered with these forms of crime. This volume is likely to become an essential reference for forensic scientists, psychiatrists, psychologists and criminal justice, legal and law enforcement personnel involved in the investigation and prosecution of serial violent crimes.