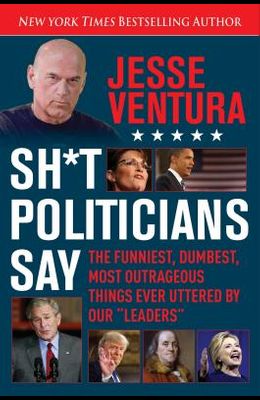 Sh*t Politicians Say: The Funniest, Dumbest, Most Outrageous Things Ever Uttered by Our leaders]skyhorse Publishing]bc]b102]07/12/2016]pol0

From the moment a Founding Father first asked for a vote, politicians have been saying dumb stuff. From George Washington to George Bush (both of them ) right on to present-day pundits like Donald Trump, Sarah Palin, and Hillary Clinton, political leaders can always be counted on to say funny, exasperating, and nonsensical things, often unintentionally. In Sh*t Politicians Say , Jesse Ventura shares the most entertaining and disturbing thoughts from his political brethren, including these winners: The concept of global warming was created by and for the Chinese in order to make U.S. manufacturing non-competitive. --Donald Trump I am not worried about the deficit. It is big enough to take care of itself. --Ronald Reagan I think gay marriage is something that should be between a man and a woman. --Arnold Schwarzenegger I love California, I practically grew up in Phoenix. --Dan Quayle A zebra does not change its spots. --Al Gore People have got to know whether or not their president is a crook. Well, I'm not a crook. I've earned everything I've got. --Richard Nixon Death has a tendency to encourage a depressing view of war. --former Defense Secretary Donald Rumsfeld I'll be long gone before some smart person ever figures out what happened inside this Oval Office. --George W. Bush From bigoted statements to outright lies . . . flip-flopping to just TMI, Sh*t Politicians Say will provide readers with a welcome respite from the presidential campaigns.

Books similiar to Sh*t Politicians Say: The Funniest, Dumbest, Most Outrageous Things Ever Uttered by Our leaders]skyhorse Publishing]bc]b102]07/12/2016]pol0

List of All Editions of Sh*t Politicians Say: The Funniest, Dumbest, Most Outrageous Things Ever Uttered by Our leaders]skyhorse Publishing]bc]b102]07/12/2016]pol0