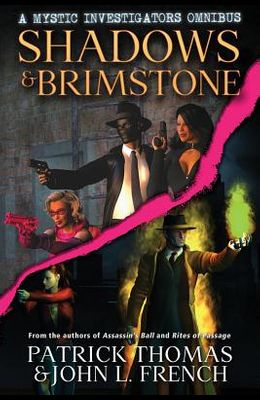 Strap in for a breakneck ride that will take you from the Pulp Era to the streets of Hell itself... FROM THE SHADOWS In a bygone era, criminals owned the city but there were those willing to put on a costume to fight evil and corruption. Avenging the death of loved ones, they fight in the night for those who cannot defend themselves. The Nightmare put on his mask to settle the score for his chauffeur's murdered daughter. The Pink Reaper donned her costume and gadgets to bring her uncle's killers to justice. And Nemesis, the daughter of night herself, fights both the evil in this world and her own missing memory. Together and separately, they battle for those the system has forgotten or forces the weak are simply powerless to stop. That is until Zeus, the king of the gods who stole Nemesis's memories, comes back to finish the job and destroy anyone who dares stand in his way. BULLETS & BRIMSTONE In Baltimore, crime is hell. And in Hell crime is far worse. When a soul goes missing in Charm City, the Devil wants his due and Negral, forgotten god and Hell's Detective, comes looking. When his own methods fail, he calls on Detective Bianca Jones despite the animosity between her and his boss. Together they search for the soul. In the process, Negral unwittingly gains a disciple and is forgotten no longer. He is forced to choose between honor and power. When an old enemy manages to make Negral disappear into the inside of a locked room mystery, the pair must work the case from the inside and out before the forgotten god fades away to oblivion.