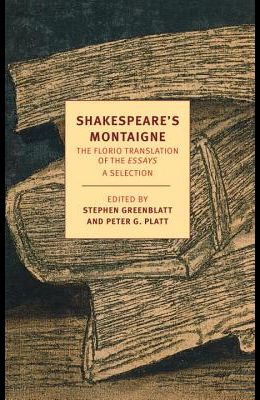 Shakespeare's Montaigne: The Florio Translation of the Essays

An NYRB Classics Original Shakespeare, Nietzsche wrote, was Montaigne's best reader--a typically brilliant Nietzschean insight, capturing the intimate relationship between Montaigne's ever-changing record of the self and Shakespeare's kaleidoscopic register of human character. And there is no doubt that Shakespeare read Montaigne--though how extensively remains a matter of debate--and that the translation he read him in was that of John Florio, a fascinating polymath, man-about-town, and dazzlingly inventive writer himself. Florio's Montaigne is in fact one of the masterpieces of English prose, with a stylistic range and felicity and passages of deep lingering music that make it comparable to Sir Robert Burton's Anatomy of Melancholy and the works of Sir Thomas Browne. This new edition of this seminal work, edited by Stephen Greenblatt and Peter G. Platt, features an adroitly modernized text, an essay in which Greenblatt discusses both the resemblances and real tensions between Montaigne's and Shakespeare's visions of the world, and Platt's introduction to the life and times of the extraordinary Florio. Altogether, this book provides a remarkable new experience of not just two but three great writers who ushered in the modern world.

Books similiar to Shakespeare's Montaigne: The Florio Translation of the Essays

List of All Editions of Shakespeare's Montaigne: The Florio Translation of the Essays