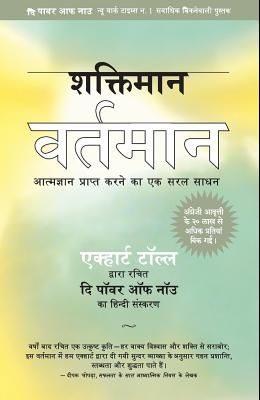 The No. 1 New York Times bestseller, The Power of Now is a guide to spiritual enlightenment from a man who is emerging as one of this generations clearest, most inspiring teachers. Eckhart Tolle is not aligned with any particular religion but does what all the great masters have done: shows that the way, the truth, and the light already exist within each human being. There is no need to look elsewhere. During February-March 2002, Eckhart traveled to India to enlighten people on the spiritual path through a series of talks in Chennai and Mumbai, and an eight-day Spiritual Retreat held in Rishikesh. The Indian edition of The Power of Now, already in its twelfth reprint, has sold thousands of copies. The Hindi translation of this book will spread his teaching to an even wider audience. At the heart of this book, which has already been translated into almost all the major languages of the world, is Eckhart's own story of early despair that culminated in a life-transforming experience of enlightenment at the age of twenty-nine. He emerged to share insights on the perils of the mind, the power of the present, and the accessibility of one's true nature.