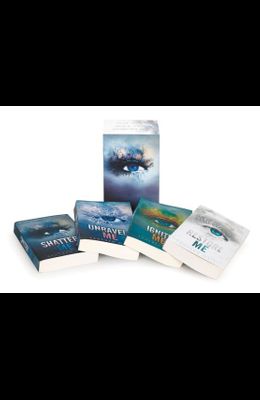 The first four novels in Tahereh Mafi's New York Times bestselling Shatter Me series ( Shatter Me , Unravel Me , Ignite Me , and Restore Me ) are available together for the first time in this paperback box set collection No one knows why Juliette's touch is fatal, but The Reestablishment has plans for her. Plans to use her as a weapon. But Juliette has plans of her own. After a lifetime without freedom, she's finally discovering a strength to fight for herself--and for a future with the one boy she thought she'd lost forever. The Shatter Me series, which New York Times bestselling author Ransom Riggs called a thrilling, high-stakes saga of self-discovery and forbidden love, is perfect for fans who crave action-packed novels like Victoria Aveyard's Red Queen , Alexandra Bracken's The Darkest Minds , and Marie Lu's Legend. And don't miss Defy Me , the shocking fifth book in the Shatter Me series