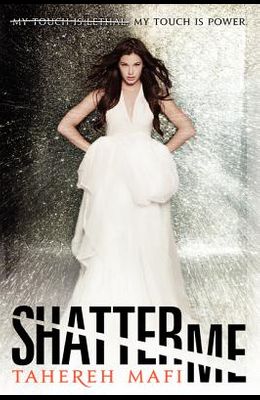 Book #1 in the Shatter Me Series
by
Tahereh Mafi

The gripping first installment in New York Times bestselling author Tahereh Mafi's Shatter Me series. One touch is all it takes. One touch, and Juliette Ferrars can leave a fully grown man gasping for air. One touch, and she can kill. No one knows why Juliette has such incredible power. It feels like a curse, a burden that one person alone could never bear. But The Reestablishment sees it as a gift, sees her as an opportunity. An opportunity for a deadly weapon. Juliette has never fought for herself before. But when she's reunited with the one person who ever cared about her, she finds a strength she never knew she had. Don't miss Restore Me , the electrifying fourth installment of this New York Times bestselling series, available now

From the Back Cover You can't touch me, I whisper. I'm lying, is what I don't tell him. He can touch me, is what I'll never tell him. But things happen when people touch me. Strange things. Bad things. No one knows why Juliette's touch is fatal, but The Reestablishment has plans for her. Plans to use her as a weapon. But Juliette has plans of her own. After a lifetime without freedom, she's finally discovering a strength to fight back for the very first time--and to find a future with the one boy she thought she'd lost forever.