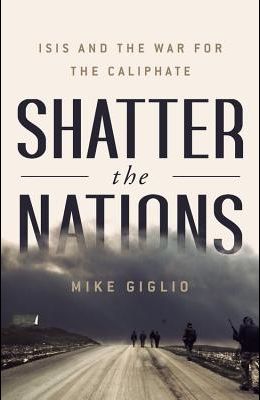 Shatter the Nations: ISIS and the War for the Caliphate

Unflinching dispatches of an embedded war reporter covering ISIS and the unlikely alliance of forces who came together to defeat it. The battle to defeat ISIS was an unremittingly brutal and dystopian struggle, a multi-sided war of gritty local commandos and militias. Mike Giglio takes readers to the heart of this shifting, uncertain conflict, capturing the essence of a modern war. At its peak, ISIS controlled a self-styled caliphate the size of Great Britain, with a population cast into servitude that numbered in the millions. Its territory spread across Iraq and Syria as its influence stretched throughout the wider world. Giglio tells the story of the rise of the caliphate and the ramshackle coalition--aided by secretive Western troops and American airstrikes--that was assembled to break it down village by village, district by district. The story moves from the smugglers, traffickers, and jihadis working on the ISIS side to the victims of its zealous persecution and the local soldiers who died by the thousands to defeat it. Amid the battlefield drama, culminating in a climactic showdown in Mosul, is a dazzlingly human portrait of the destructive power of extremism, and of the tenacity and astonishing courage required to defeat it.