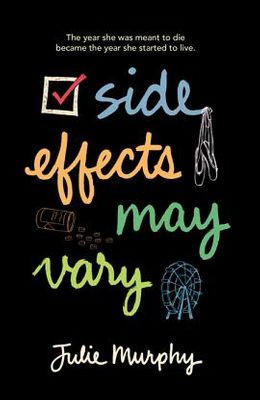 Side Effects May Vary

The first book from Julie Murphy, the #1 New York Times bestselling author of Dumplin' --now a Netflix feature film starring Danielle Macdonald and Jennifer Aniston, with a soundtrack by Dolly Parton For fans of John Green and Rainbow Rowell comes this powerful novel about a girl with cancer who creates a take-no-prisoners bucket list that sets off a war at school--only to discover she's gone into remission. When sixteen-year-old Alice is diagnosed with leukemia, she vows to spend her final months righting wrongs. So she convinces her best friend, Harvey, to help her with a crazy bucket list that's as much about revenge as it is about hope. But just when Alice's scores are settled, she goes into remission, and now she must face the consequences of all she's said and done. Contemporary realistic fiction readers who love romantic stories featuring strong heroines will find much to savor in this standout debut.

From the Back Cover What if you'd been living your life as if you were dying--only to find out that you had your whole future ahead of you? When sixteen-year-old Alice is diagnosed with leukemia, her prognosis is grim. To maximize the time she does have, she vows to spend her final months righting wrongs--however she sees fit. She convinces her friend Harvey, who she knows has always had feelings for her, to help her with a crazy bucket list that's as much about revenge (humiliating her ex-boyfriend and getting back at her archnemesis) as it is about hope (doing something unexpectedly kind for a stranger). But just when Alice's scores are settled, she goes into remission. Now Alice is forced to face the con-sequences of all that she's said and done, as well as her true feelings for Harvey. But has she caused irreparable damage to the people around her--and to the one person who matters most? Julie Murphy's Side Effects May Vary is a fearless and moving tour de force about love, life, and facing your own mortality.