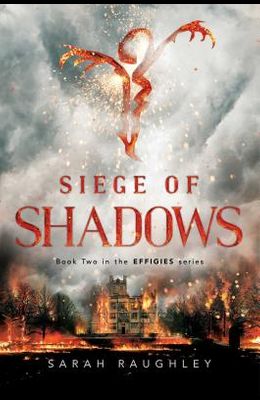 Book #2 in the Effigies Series
by
Sarah Raughley

The Effigies seek out the true origins of the Phantoms that terrorize their world in this thrilling follow-up to Fate of Flames , which Elise Chapman calls an immersive and monstrously fun read. There's nowhere to hide. Not when you're an Effigy. No matter where they go, Maia and the other Effigies can't escape the eyes of the press--especially not after failing to capture Saul, whose power to control the monstrous Phantoms has left the world in a state of panic. It's been two months since Saul's disappearance, and there's still no sign of him, leaving the public to wonder whether the Sect--and the Effigies--are capable of protecting anyone. When Saul suddenly surfaces in the middle of the Sahara desert, the Sect sends Maia and her friends out after him. But instead of Saul, they discover a dying soldier engineered with Effigy-like abilities. Even worse, there may be more soldiers like him out there, and it looks like the Effigies are their prime targets. Yet the looming danger of Saul and this mysterious new army doesn't overshadow Maia's fear of the Sect, who ordered the death of the previous Fire Effigy, Natalya. With enemies on all sides and the world turning against them, the Effigies have to put their trust in each other--easier said than done when secrets threaten to tear them apart.