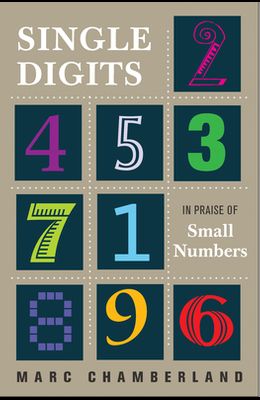 The remarkable properties of the numbers one through nine In Single Digits , Marc Chamberland takes readers on a fascinating exploration of small numbers, from one to nine, looking at their history, applications, and connections to various areas of mathematics, including number theory, geometry, chaos theory, numerical analysis, and mathematical physics. For instance, why do eight perfect card shuffles leave a standard deck of cards unchanged? And, are there really six degrees of separation between all pairs of people? Chamberland explores these questions and covers vast numerical territory, such as illustrating the ways that the number three connects to chaos theory, the number of guards needed to protect an art gallery, problematic election results and so much more. The book's short sections can be read independently and digested in bite-sized chunks--especially good for learning about the Ham Sandwich Theorem and the Pizza Theorem. Appealing to high school and college students, professional mathematicians, and those mesmerized by patterns, this book shows that single digits offer a plethora of possibilities that readers can count on.

From the Back Cover A veritable potpourri of mathematical factoids, Single Digits will provide you with conversational ammunition for all manner of nerdy gatherings. --Henry Reich, creator of MinutePhysics and MinuteEarth Dispensing incisive, brief expositions of mathematical observations, facts, theorems, proofs, conjectures, and open problems, this cornucopia of a book ranges through geometry, number theory, combinatorics, topology, and many other areas. From the elegantly elementary to the sublimely difficult, each of its short sections is liable to stimulate an eager search for further enlightenment, whether from the internet, the library, or your own mind. --Avner Ash, coauthor of Elliptic Tales A survey of mathematical gems, ancient and modern, this book is certain to arouse the curiosity of anyone with even a passing interest in mathematics. Chamberland's clear explanations provide an enticing introduction to each topic and will make you want to learn more. --Jamie Pommersheim, coauthor of Number Theory This book describes properties associated with the numbers one to nine and connects important areas of mathematics, including number theory, geometry, chaos theory, and applied mathematics. Single Digits is filled with nuggets of mathematical information, compelling topics, and interesting ideas for anyone curious about the subject. --Lee Fothergill, Mount Saint Mary College A celebration of small numbers, Single Digits presents mathematical vignettes organized by their connection to single nonzero digits. Progressing from the elementary to the more elaborate, Chamberland brings together some really interesting mathematics, and his well-told stories will intrigue a general, knowledgeable audience. --Jennifer Quinn, University of Washington, Tacoma