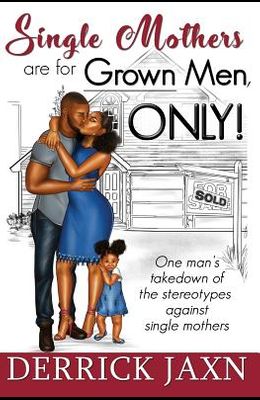 Single Mothers Are for Grown Men, Only!

Our understanding of single mothers is broken. Not like, The x-ray came back and you may need a cast, broken; but It's time to evacuate. The levy has been demolished, broken. Mentally, our streets are flooded with ignorance, yet we simply paddle along as if this is the way things are going to be. All things common sense seem to be immersed under the murky waters of, She should've known better, She should've been married first, and It's her fault he ran out. She's the one who chose him. It's bizarre that in a world where cars can drive themselves and phones can recognize thumb prints, we're still committed to such ignorance, but that's about to change. For the last few years I've posted articles, memes, poems, and even viral videos with tens of millions of views on this subject, but like sandbags to an ocean, they've gotten swallowed whole without us, as a society, moving forward one inch. So, I've decided to take things up a notch with Single Mothers are for Grown Men, ONLY and drain the preconceived notions, biases, and stereotypes once and for all, particularly as they pertain to dating and relationships. This is not some pity-ridden manual about how single moms should feel sorry for themselves. They have nothing to feel sorry about. In fact, they should be feeling the exact opposite if despite what they have to put up with, they're still able to hold their heads up and put one foot in front of the other. This is 130 pages of facts, analogies, and practical examples of how single mothers have been framed for moral crimes they've never committed, and underappreciated for the should-be obvious positive qualities they possess. It's time for a perspective adjustment. If you agree, then you've found the right book.