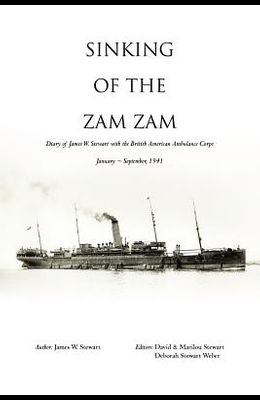 Sinking of the Zam Zam: Diary of James Stewart with the British American Ambulance Corps

Thursday, April 17th, 1941 at 5:55 in the morning a peculiar and outlandish new noise was heard by those on board... A vicious howling hissing sound I shall never forget and yet seem never quite able to remember... With a horrible rending explosive crunch the first shells came aboard. James Stewart. March 1941, James W. Stewart of Oneonta, New York, was on his way to Africa as a member of the British American Ambulance Corps sailing from New York City on the SS Zam Zam. The BAAC was making the voyage to Mombasa, Kenya, and then overland to Lake Chad to support General Charles de Gaulle's Free French forces in French Equatorial Africa with much needed ambulances. The United States had not yet become embroiled in World War II; Pearl Harbor was still months away. The men of the BAAC had volunteered because they strongly believed the US needed to come to the aid of Europe; their country needed to defeat the fascist regime being forced on Europe by Germany and the Nazi Party. This was a way they could help the cause. Along with the twenty-four BAAC members on board the Zam Zam, were 171 other passengers; missionaries and their families from the US, a group of French Canadian Catholic Brothers, tobacco businessmen from the South, and others just needing a way to return to Europe and Africa, taking the safe route on this neutral ship. Safe until April 17th, when their intended route across the Atlantic and around the Cape of Good Hope was abruptly interrupted and they were thrown into the center of an international incident between Germany and the United States. This book, James Stewart's Diary, Sinking of the Zam Zam , is his first hand account of the adventure of their lives.