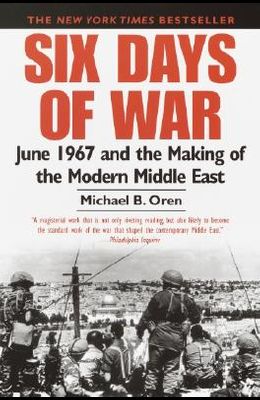 Six Days of War: June 1967 and the Making of the Modern Middle East

by
Michael B Oren

In one of the most valuable recent works on this subject, Oren, a scholar and Senior Fellow at the Shalem Center, Jerusalem, details events from the Six Day War known in the Arab world as Al-Naksah or simply the June war. This is not only the best book so far written on the Six-Day War, it is likely to remain the best.--The Washington Post Book World.

From the front Cover Though it lasted for only six tense days in June, the 1967 Arab-Israeli war never really ended. Every crisis that has ripped through this region in the ensuing decades, from the Yom Kippur War of 1973 to the ongoing intifada, is a direct consequence of those six days of fighting. Michael B. Oren's magnificent Six Days of War, an internationally acclaimed bestseller, is the first comprehensive account of this epoch-making event. Writing with a novelist's command of narrative and a historian's grasp of fact and motive, Oren reconstructs both the lightning-fast action on the battlefields and the political shocks that electrified the world. Extraordinary personalities--Moshe Dayan and Gamal Abdul Nasser, Lyndon Johnson and Alexei Kosygin--rose and toppled from power as a result of this war; borders were redrawn; daring strategies brilliantly succeeded or disastrously failed in a matter of hours. And the balance of power changed--in the Middle East and in the world. A towering work of history and an enthralling human narrative, Six Days of War is the most important book on the Middle East conflict to appear in a generation.