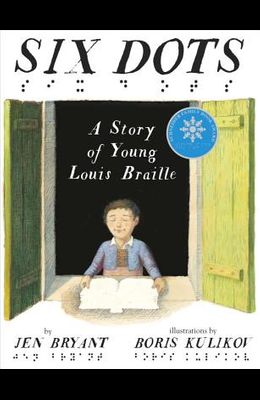 by
Jen Bryant and Boris Kulikov

An inspiring picture-book biography of Louis Braille a blind boy so determined to read that he invented his own alphabet. Louis Braille was just five years old when he lost his sight. He was a clever boy, determined to live like everyone else, and what he wanted more than anything was to be able to read. Even at the school for the blind in Paris, there were no books for him. And so he invented his own alphabet a whole new system for writing that could be read by touch. A system so ingenious that it is still used by the blind community today. Award-winning writer Jen Bryant tells Braille s inspiring story with a lively and accessible text, filled with the sounds, the smells, and the touch of Louis s world. Boris Kulikov s inspired paintings help readers to understand what Louis lost, and what he was determined to gain back through books. An author s note and additional resources at the end of the book complement the simple story and offer more information for parents and teachers.