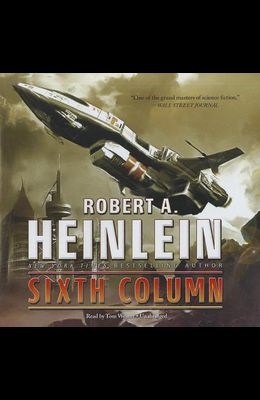 by
Robert A Heinlein and Tom Weiner

It's six against six million in a brilliantly waged near-future war for nothing less than liberty and justice for all. The totalitarian East has triumphed in a massive invasion, and the United States has fallen to a dictatorial superpower bent on total domination. That power is consolidating its grip through concentration camps, police state tactics, and a total monopoly upon the very thoughts of the conquered populace. A tiny enclave of scientists and soldiers survives, unbeknownst to America's new rulers. It's six against six million--but those six happen to include a scientific genius, a master of subterfuge and disguise who learned his trade as a lawyer-turned-hobo, and a tough-minded commander who knows how to get the best out of his ragtag assortment of American discontents, wily operators, and geniuses. It's going to take technological savvy and a propaganda campaign that would leave Madison Avenue aghast, but the US will rise again. The counterinsurgency for freedom is on, and defeat is not an option.