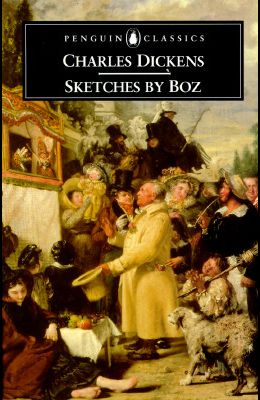 Charles Dickens's first book, complete with all the pathos and comic invention of his later masterpieces Published under the pen-name 'Boz', Charles Dickens's first book Sketches by Boz (1836) heralded an exciting new voice in English literature. This richly varied collection of observation, fancy and fiction shows the London he knew so intimately at its best and worst - its streets, theatres, inns, pawnshops, law courts, prisons, omnibuses and the river Thames - in honest and visionary descriptions of everyday life and people. Through pen portraits that often anticipate characters from his great novels, we see the condemned man in his prison cell, garrulous matrons, vulgar young clerks and Scrooge-like bachelors, while Dickens's powers for social critique are never far from the surface, in unflinching depictions of the vast metropolis's forgotten citizens, from child workers to prostitutes. A startling mixture of humour and pathos, these Sketches reveal London as wonderful terrain for an extraordinary young writer. In his introduction, Dennis Walder discusses Dickens's social commentary, his view of London and his imaginative mixing of genres, and places the Sketches in the tradition of eighteenth and nineteenth-century reportage. This edition also includes the original illustrations by George Cruickshank, a chronology, further reading, appendices and notes. For more than seventy years, Penguin has been the leading publisher of classic literature in the English-speaking world. With more than 1,700 titles, Penguin Classics represents a global bookshelf of the best works throughout history and across genres and disciplines. Readers trust the series to provide authoritative texts enhanced by introductions and notes by distinguished scholars and contemporary authors, as well as up-to-date translations by award-winning translators.

From the Back Cover Sketches by Boz collected a rich and strange mixture of reportage, observation, fancy and fiction centred on the metropolis. It was Dickens's first book, published when he was twenty-four, and in it we find him walking the London streets, in theatres, pawnshops, lawcourts, prisons, along the Thames and on the omnibus, missing nothing, recording and transforming urban and suburban life into new terrain for literature. 'The first sprightly runnings of his genius are undoubtedly here, ' wrote Dickens's friend and biographer John Forster. Sketches is a remarkable achievement, and looks towards Dickens's giant novels in its profusion of characters, its glimpses of surreal modernity and its limitless fund of pathos and comic invention.

Books similiar to Sketches by Boz