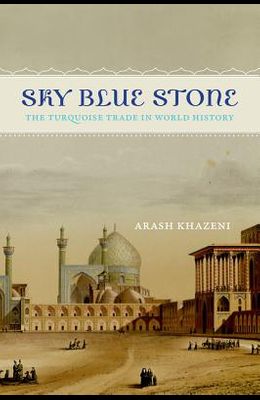 This book traces the journeys of a stone across the world. From its remote point of origin in the city of Nishapur in eastern Iran, turquoise was traded through India, Central Asia, and the Near East, becoming an object of imperial exchange between the Safavid, Mughal, and Ottoman empires. Along this trail unfolds the story of turquoise--a phosphate of aluminum and copper formed in rocks below the surface of the earth--and its discovery and export as a global commodity. In the material culture and imperial regalia of early modern Islamic tributary empires moving from the steppe to the sown, turquoise was a sacred stone and a potent symbol of power projected in vivid color displays. From the empires of Islamic Eurasia, the turquoise trade reached Europe, where the stone was collected as an exotic object from the East. The Eurasian trade lasted into the nineteenth century, when the oldest mines in Iran collapsed and lost Aztec mines in the Americas reopened, unearthing more accessible sources of the stone to rival the Persian blue. Sky Blue Stone recounts the origins, trade, and circulation of a natural object in the context of the history of Islamic Eurasia and global encounters between empire and nature.

From the front Cover Arash Khazeni offers a history that pushes beyond boundaries of time, space, and method. We move from geological time to the nineteenth century, from Iran to New Mexico, and from cultural to environmental history. This book represents a seminal contribution to the history of commodities and the best of the future of Middle East Studies. Alan Mikhail, author of The Animal in Ottoman Egypt Khazeni manages that rare feat of combining the methodological finesse of a relatively new historical framework--world history--with an entirely new set of source materials, Persian 'jewel books, ' which supply entry into the world of cultural meanings attached to turquoises. The scholarship is impeccable; it sets a new standard for thinking about the Middle East as part of a larger Eurasian world. Nile Green, editor of Global Muslims in the Age of Steam and Print