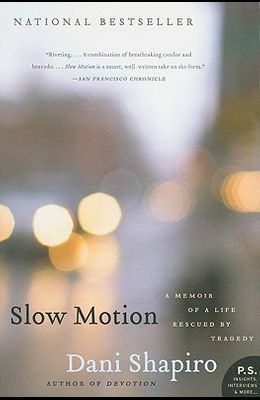 Slow Motion: A Memoir of a Life Rescued by Tragedy

Telling of a life nearly ruined by the gift of beauty, and then saved through tragedy, Shapiro's memoir is a beautiful, account of how a life gone terribly wrong can be rescued through tragedy.

From the Back Cover At twenty-three, Dani Shapiro was in the midst of a major rebellion against her religious upbringing. She had dropped out of college, was halfheartedly acting in television commercials, and was carrying on with an older married man when her life was changed, in an instant, by a phone call. Her parents had been in a devastating car accident. Neither was expected to survive. In her first memoir, Shapiro offers this powerful true story of a life turned around--not by miracles or happy endings, but by unexpected personal catastrophe.