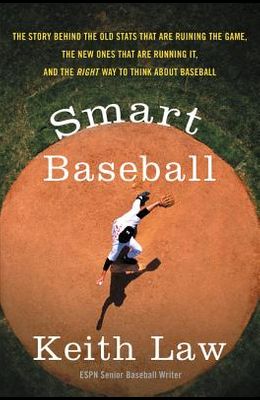 Smart Baseball: The Story Behind the Old STATS That Are Ruining the Game, the New Ones That Are Running It, and the Right Way to Think

Predictably Irrational meets Moneyball in ESPN veteran writer and statistical analyst Keith Law's iconoclastic look at the numbers game of baseball, proving why some of the most trusted stats are surprisingly wrong, explaining what numbers actually work, and exploring what the rise of Big Data means for the future of the sport. For decades, statistics such as batting average, saves recorded, and pitching won-lost records have been used to measure individual players' and teams' potential and success. But in the past fifteen years, a revolutionary new standard of measurement--sabermetrics--has been embraced by front offices in Major League Baseball and among fantasy baseball enthusiasts. But while sabermetrics is recognized as being smarter and more accurate, traditionalists, including journalists, fans, and managers, stubbornly believe that the old way--a combination of outdated numbers and gut instinct--is still the best way. Baseball, they argue, should be run by people , not by numbers. In this informative and provocative book, the renowned ESPN analyst and senior baseball writer demolishes a century's worth of accepted wisdom, making the definitive case against the long-established view. Armed with concrete examples from different eras of baseball history, logic, a little math, and lively commentary, he shows how the allegiance to these numbers--dating back to the beginning of the professional game--is firmly rooted not in accuracy or success, but in baseball's irrational adherence to tradition. While Law gores sacred cows, from clutch performers to RBIs to the infamous save rule, he also demystifies sabermetrics, explaining what these new numbers really are and why they're vital. He also considers the game's future, examining how teams are using Data--from PhDs to sophisticated statistical databases--to build future rosters; changes that will transform baseball and all of professional sports.

From the Back Cover For the past fifteen years, many baseball fans, writers, and commentators have remained mired in the muck of old statistics--baseball card numbers such as batting average, saves recorded, and a pitcher's won-lost record--while newer, smarter, and at times counterintuitive baseball stats known as sabermetrics have become commonplace throughout Major League Baseball. Yet, despite their popularity, confusion persists about these new stats, with much of the baseball world still following the old way--a combination of those outdated numbers and gut instinct--to evaluate players' contributions and careers. Baseball, they argue, should be run by people, not by numbers. ESPN senior baseball writer Keith Law, respectfully, or perhaps not so respectfully, disagrees. In this provocative book, the outspoken Law takes on the established view of baseball stats, undermining over a century's worth of baseball dogma. With many of these numbers dating back to the beginning of the game, he examines how allegiance to these old stats is firmly rooted, not in the modern game as it's played, but in baseball's irrational adherence to tradition. Using entertaining anecdotes, logic, and occasionally just a little math, he exposes the flaws in much of the game's orthodoxy, from the illusion of clutch performers, to the dishonesty of RBIs, to how the save rule--invented by a journalist--has ruined bullpens for decades. But Smart Baseball is not just about tearing down tradition. Law also offers a clear-eyed discussion of the new stats that are helping teams win, changing how players are valued, and altering how we talk about the game. Exploring long-underappreciated numbers like On-Base Percentage, as well as newer stats like Win Probability Added and Wins Above Replacement, he simplifies the math that has gotten in the way for many curious fans, providing understandable explanations of what these numbers measure and why they work better. In addition he delves into the future of baseball stats, uncovering the escalating arms race for statistical talent being waged by almost every MLB front office, as the teams search for innovative ways to find the statistical edge on and off the field. What emerges is an intelligent, informative, and engaging assault on the baseball establishment. Brought to life by Law's unapologetic style, Smart Baseball is an iconoclastic look at the numbers game of baseball, proving why some of the most trusted stats are surprisingly wrong, detailing the numbers that actually work, and revealing what the rise of Big Data means for the future of the sport.