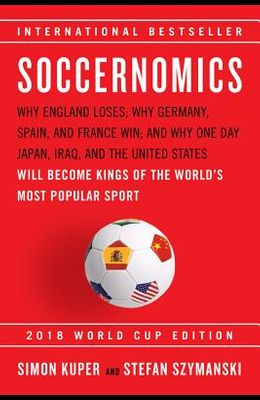 Soccernomics (2018 World Cup Edition): Why England Loses; Why Germany, Spain, and France Win; And Why One Day Japan, Iraq, and the United States Will

by
Simon Kuper and Stefan Szymanski

The 2018 World Cup edition of the international bestseller and the most intelligent book ever written about soccer ( San Francisco Chronicle ) is updated throughout and features new chapters on the FIFA scandal, why Iceland wins, and women's soccer. Named one of the Best Books of the Year by the Guardian , Slate , Financial Times , Independent (UK), and Bloomberg News Why doesn't the United States dominate soccer internationally? And how can it? Which is the best soccer nation on Earth? Who has the most passionate fans? What impact does soccer have on suicide rates? Which sport will dominate the Earth? NFL or the English Premier League? Why are the people who run soccer clubs so dumb? These are some of the questions every soccer fanatic has asked. Soccernomics answers them all. Written with an economist's brain and a soccer writer's skill, it applies high-powered analytical tools to everyday soccer topics, looking at data and revealing counterintuitive truths about the world's most loved game. It all adds up to a revolutionary new way of looking at soccer that could change the way the game is played.