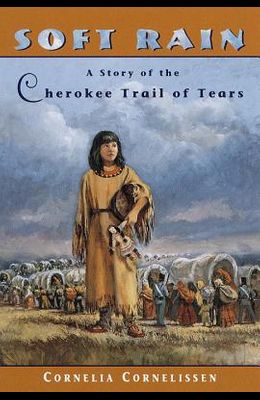 Soft Rain: A Story of the Cherokee Trail of Tears

This novel recounts the relocation of the Cherokee people in 1838 and their forced march westward across the Trail of Tears, as witnessed through the eyes of a nine-year-old girl who is forced to leave behind her blind grandmother, her father, brother, and even her puppy.

From the Back Cover SOFT RAIN IS NINE YEARS OLD when her life changes. Without warning, white soldiers arrive at her house. They command Soft Rain and her mother to go with them, taking only the possessions they can instantly pack and carry. They are forced to leave behind Soft Rain's blind grandmother, her father and brother, and even her puppy. No one will answer Soft Rain's questions: Where are they going? What will become of her family? It is 1838, the year of the enforced relocation of the Cherokee people from their southern homes to the unknown West. The long and dangerous journey there, across rivers and over mountains, through rain and snow, is an unwelcome adventure for Soft Rain and her people. Soft Rain's inspiring story of strength and hope is a testament to all those who lived through the Trail of Tears.
From the front Cover In Soft Rain, a 9-year-old Cherokee girl finds herself in the same situation as Sweet Leaf as soldiers arrive one day to take her and her mother to walk the Trail of Tears, leaving the rest of her family behind. It all begins when Soft Rain's teacher reads a letter stating that as of May 23, 1838, all Cherokee people are to leave their land and move to what many Cherokees called the land of darkness. . .the west. Soft Rain is confident that her family will not have to move, because they have just planted corn for the next harvest. Because Soft Rain knows some of the white man's language, she soon learns that they must travel across rivers, valleys, and mountains. On the journey, she is forced to eat the white man's food and sees many of her people die. Her courage and hope are restored when she is reunited with her father, a leader on the Trail, chosen to bring her people safely to their new land.