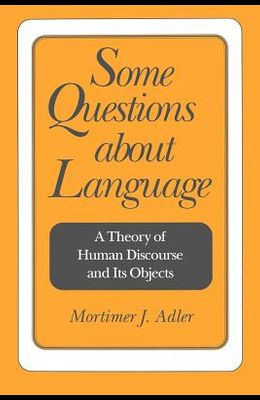 Some Questions about Language: A Theory of Human Discourse and Its Objects

How do meaningless marks and sounds become the meaningful words of a natural language? To what do words having referential significance refer? What is the meaning of the words that do not have referential significance? Can ordinary language really do what it appears to do, or is this an illusion? Dr. Adler maintains that these fundamental questions are not satisfactorily treated in the two main philosophies of language that have dominated twentieth-century thinking on the subject - the syntactical and 'ordinary language' approaches. Drawing upon the tradition of Aristotle, Aquinas, Poinsot, and Husserl, Dr. Adler's own discussion exemplifies the third approach, which he describes as semantic and lexical. In this now -classic work, the fruit of more than 50 years' concern with the philosophy of language, Dr. Adler advances a powerful theory of meaning and applies it to some outstanding philosophical problems. In unpretentious and uncluttered prose, he provides a limpid introduction to a number of knotty philosophical issues and at the same time issues a challenge to some of the most tenacious doctrines of the modern world.

List of All Editions of Some Questions about Language: A Theory of Human Discourse and Its Objects