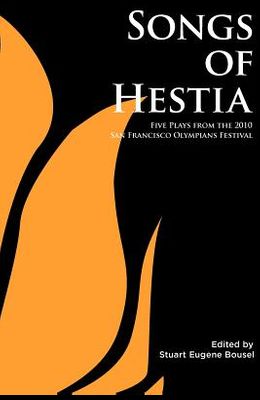 by
Nirmala Nataraj and Bennett Fisher and Claire Rice

In Songs of Hestia - Five Plays From the 2010 San Francisco Olympians Festival, five playwrights adapt some of Western culture's oldest stories to illuminate our present-day concerns with imagination, creativity, curiosity and passion. These are plays that ask the hard questions, that explore our humanity through exploring the myths that make us who we are. Hestia, the goddess of the hearth, is variously an ex-nun who runs a Hollywood hot dog cart (Aphrodite: A Romance in Infomercials, by Nirmala Nataraj); a barista who serves as the play's moral conscience (Hermes by Bennett Fisher); a sharp-tongued spinster (Juno en Victoria by Stuart Eugene Bousel); a crazed, childlike wraith (Demeter's Daughter by Claire Rice); and a nurturing but ultimately ineffectual goddess (Hephaestus and the Three Golden Robots by Evelyn Jean Pine). With an introduction by Marissa Skudlarek. The San Francisco Olympians Festival is an annual festival produced by No Nude Men Productions. Each year the festival brings together over 100 Bay Area writers, fine artists, directors and actors to create plays inspired by Greek mythology to show how these Gods and myths remain relevant today. This volume brings together five of the plays from the first Olympians Festival in 2010 by Nirmala Nataraj, Bennett Fisher, Stuart Eugene Bousel, Claire Rice, and Evelyn Jean Pine with an introduction by Marissa Skudlarek.