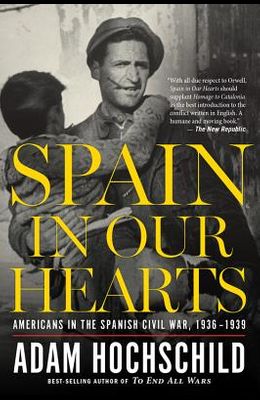 A New York Times B estseller With all due respect to Orwell, Spain in Our Hearts should supplant Homage to Catalonia as the best introduction to the conflict written in English. A humane and moving book. -- ew Republic Excellent and involving . . . What makes Hochschild's] book so intimate and moving is its human scale. --Dwight Garner, New York Times For three years in the 1930s, the world watched, riveted, as the Spanish Civil War became the battleground in a fight between freedom and fascism that would soon take on global proportions. Confronting a right-wing coup led by Francisco Franco and heavily aided by Hitler and Mussolini, volunteers flooded in to support Spain's democratic government. Among them were nearly three thousand Americans, called by their convictions to lend a hand in a brutal conflict their government wanted no part of. In Spain in Our Hearts, Adam Hochschild weaves together the stories of some dozen foreigners to reveal the full tragedy and importance of the war. Among them are a fiery nineteen-year-old Kentucky woman on her honeymoon whose experience in revolutionary Barcelona became the high point of her life, a pair of rivalrous New York Times reporters who covered the fighting from opposite sides, and a widely admired American couple on the war's front lines whose inspiring, heartbreaking love story threads through this account. We still have many lessons to learn from this chapter in history, and Spain in Our Hearts is Adam Hochschild at his very best. An unusually well-written narrative, full of telling detail and vignettes that capture great human drama. -- Wall Street Journal After reading Hochschild's book, it's impossible to feel anything but admiration -- and awe. -- San Francisco Chronicle