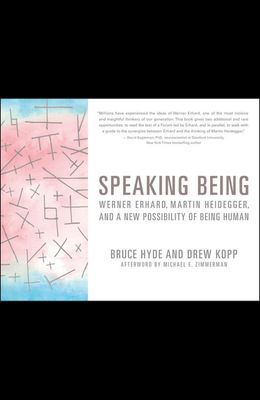 Speaking Being: Werner Erhard, Martin Heidegger, and a New Possibility of Being Human

by
Bruce Hyde and Drew Kopp

Speaking Being: Werner Erhard, Martin Heidegger, and a New Possibility of Being Human is an unprecedented study of the ideas and methods developed by the thinker Werner Erhard. In this book, those ideas and methods are revealed by presenting in full an innovative program he developed in the 1980s called The Forum--available in this book as a transcript of an actual course led by Erhard in San Francisco in December of 1989. Since its inception, Erhard's work has impacted the lives of millions of people throughout the world. Central to this study is a comparative analysis of Erhard's rhetorical project, The Forum, and the philosophical project of Martin Heidegger. Through this comparative analysis, the authors demonstrate how each thinker's work sometimes parallels and often illuminates the other. The dialogue at work in The Forum functions to generate a language which speaks being . That is, The Forum is an instance of what the authors call ontological rhetoric a technology of communicating what cannot be said in language. Nevertheless, what does get said allows those participating in the dialogue to discover previously unseen aspects of what it currently means to be human. As a primary outcome of such discovery, access to creating a new possibility of what it is to be human is made available. The purpose of this book is to show how communication of the unspoken realm of language-- speaking being --is actually accomplished in The Forum, and to demonstrate how Erhard did it in 1989. Through placing Erhard's language use next to Heidegger's thinking--presented in a series of Sidebars and Intervals alongside The Forum transcript--the authors have made two contributions. They have illuminated the work of two thinkers, who independently developed similar forms of ontological rhetoric while working from very different times and places. Hyde and Kopp have also for the first time made Erhard's extraordinary form of ontological rhetoric available for a wide range of audiences, from scholars at work within a variety of academic disciplines to anyone interested in exploring the possibility of being for human beings. From the Afterword: I regard Speaking Being as an enormously important contribution to understanding Heidegger and Erhard. The latter has received far too little serious academic attention, and this book begins to make up for that lack. Moreover, the book's analysis of Heidegger's thought is among the best that I have ever read. I commend this book to all readers without reservation. Michael E. Zimmerman, Professor Emeritus, University of Colorado, Boulder

From the Back Cover PRAISE FOR SPEAKING BEING Millions have experienced the ideas of Werner Erhard, one of the most incisive and insightful thinkers of our generation. This book gives two additional and rare opportunities: to read the text of a Forum led by Erhard, and in parallel, to walk with a guide to the synergies between Erhard and the thinking of Martin Heidegger. -- DAVID EAGLEMAN , PhD, neuroscientist at Stanford University, New York Times bestselling author This book is powerful, imaginative, frustrating, amusing, threatening, and enlightening--all at the same time. It also has the power to transform your life. --JONATHAN D. MORENO , University of Pennsylvania Professor of Ethics, author of Impromptu Man The profound impact of Werner Erhard's work on culture and society is a manifestation of an incredible insight, the experience of being, presented in this book through a comparative analysis of a transcript of a 1989 Forum led by Erhard alongside Heidegger's reflections on the meaning of 'being there.' The authors have drawn amazing parallels between these two extraordinary thinkers and have demonstrated the intersections of Heidegger's language with Erhard's ontological rhetoric of transformation. Erhard has at times described aspects of his method as ruthless compassion , and like all forms of compassion, evident here is a fundamental motivating desire to alleviate the suffering of others. --JAMES R. DOTY, MD, Founder and Director, The Center for Compassion and Altruism Research and Education, Professor of Neurosurgery, Stanford University School of Medicine, and Senior Editor of the Oxford Handbook of Compassion Science Speaking Being is not a book. It is a multimodal tour de force of ontological rhetoric that hails its reader into an event and in so doing performs as an event, rather than what is commonly rendered as a book between two covers. Its status as an event is performed on every page wherein the 'showing' of Being is enacted via its remarkable design. Kaleidoscopically, Bruce Hyde and Drew Kopp have drawn their readers into a dazzling display, where the participants in dialogue with Werner Erhard in a specific Forum in 1989 are put into dialogue with Martin Heidegger. The result is arguably one of the most astounding academic interventions into both Erhard's methodology and Heideggerian thought. Citing David Farrell Krell, Hyde and Kopp remind us that 'to be on a woodpath means to be in a cul-de-sac , a path that leads nowhere and has no exit.' Speaking Being puts its readers in a dizzying cul-de-sac within which they may never leave, but rather transform into one of the glittering particles of this rhetorical kaleidoscope. --CYNTHIA HAYNES, Professor of English, Clemson University, author of The Homesick Phone Book: Addressing Rhetoric in the Age of Perpetual Conflict