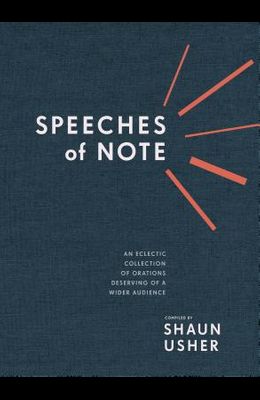 Speeches of Note: An Eclectic Collection of Orations Deserving of a Wider Audience

From the author of the popular blog and international bestselling book Letters of Note comes an illustrated collection of 80 of history's most interesting, profound, and sometimes unknown speeches from a range of scintillating personalities such as Winston Churchill, Maya Angelou, Barack Obama, Abraham Lincoln, Groucho Marx, and Tina Fey. A uniquely curated and artfully illustrated book designed to be read and displayed, Speeches of Note celebrates oratory old and new, highlighting the speeches we know and admire, including those of Winston Churchill, Ida B. Wells, Sitting Bull, and Martin Luther King Jr., while also shining a light on those speeches which, despite their brilliance, have until now been ignored or forgotten. From George Bernard Shaw's warm and rousing toast to Albert Einstein in 1930 and the commencement address affectionately given to graduates at Long Island University by Kermit the Frog, to a beautiful eulogy for Marilyn Monroe delivered at her funeral by mentor Lee Strasberg and the chilling public announcement (that was thankfully never made) by President Richard Nixon should Neil Armstrong and Buzz Aldrin become stranded on the moon, each speech is accompanied by a brief introduction to provide cultural context, as well as a photograph of the speaker or the speech being made, a gorgeous illustration, or a facsimile of the original speech itself.