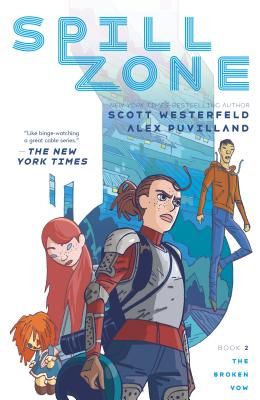 Now in paperback All hell breaks loose in Spill Zone Book 2: The Broken Vow , the second volume of this dystopian graphic novel duology by science fiction visionary Scott Westerfeld and artist Alex Puvilland. Three years ago an event destroyed the small city of Poughkeepsie, forever changing reality within its borders. Strange manifestations and lethal dangers now await anyone who enters the Spill Zone. Addison got close enough to the Spill Zone to touch it, literally. She survived the encounter, but came back changed. It turns out she's not alone. North Korea has its own Spill Zone, and a young man named Jae is the only one who made it out alive. Alive, but changed. Now Addison, Don Jae, and, curiously, a rag doll named Vespertine, share an unholy bond and uncanny powers.