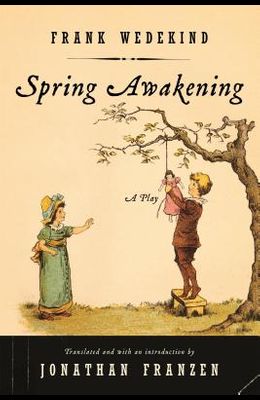 by
Frank Wedekind and Jonathan Franzen

First performed in Germany in 1906, Frank Wedekind's controversial play Spring Awakening closed after one night in New York in 1917 amid charges of obscenity and public outrage. For the better part of the twentieth century Wedekind's intense body of work was largely unpublished and rarely performed. Yet the play's subject matter--teenage desire, suicide, abortion, and homosexuality--is as explosive and important today as it was acentury ago. Spring Awakening follows the lives of three teenagers, Melchior, Moritz, and Wendl, as they navigate their entry into sexual awareness. Unlike so many works that claim to tell the truth of adolescence, Spring Awakening offers no easy answersor redemption. Today, one hundred years after the play's first performance, a new musical version of this essential modern masterpiece is being hailed as the best new musical . . . in a generation (John Heilpern, The New York Observer ). Franzen's version of the text--for so long poorly served in English--is unique in capturing the bizarre and inimitable comic spirit that animates almost every line of this unrelentingly tragic play. There couldn't be a better time for this thrilling, definitive new translation.

From the Back Cover Spring's Awakening is a tragi-comedy of teenage sex. Its fourteen-year-old heroine, Wendla, is killed by abortion pills. The young Moritz, terrorized by the world around him, and especially by his teachers, shoots himself. The ending seems likely to be the suicide of Moritz's friend, Melchior, but in a confrontation with a mysterious stranger (the famous Masked Man) he finally manages to shed his illusions and face the consequences.