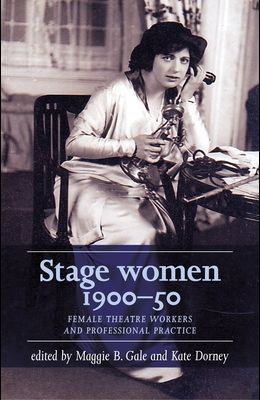 by
and Maggie B Gale and Kate Dorney

This book explores the many ways women conceptualised, constructed and participated in networks of professional practice in the theatre and performance industries between 1900 and 1950. The volume examines women's complex negotiations of their agency over both their labour and public representation. It also examines the variety of ways they used their personal and professional connections to sustain theatrical activity and their careers, in the public eye and in private. The volume opens with an introduction contextualising the historical period and its existing representation in theatre histories, outlining the intended interventions the editors and authors make in feminist theatre historiography. The book includes a series of case studies that explore a range of well-known and lesser-known women working in theatre, film and popular performance of the period. These are divided into two connected sections. 'Female Theatre Workers in the Social and Theatrical Realm' looks at the relationship between women's work - on and off stage - and autobiography, activism, technique, touring, education and the law. Section two, 'Women and Popular Performance', focuses on the careers of individual artists, once household names, including Lily Brayton, Ellen Terry, radio star Mabel Constanduros, and Oscar winning film star Margaret Rutherford. Stage women is a timely collection bringing together established and new generation researchers and accessible, cutting-edge historical and cultural research in the field of women, theatre and performance. It will appeal to students and researchers in feminist performance and cultural history.