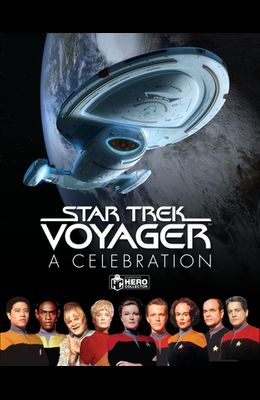 Celebrating the 25th anniversary of the TV series in 2020 Everything you want to know about Captain Kathryn Janeway's Starship Voyager and crew. The perfect holiday gift for the Star Trek fan in your life Just wonderful and so well written - stuff I never knew which surprised me - and I was on the show You will enjoy this I guarantee. - Ethan Phillips, Neelix from Star Trek: Voyager Go behind the scenes of the making of a television classic, with the cast and crew who brought the adventures of the intrepid U.S.S. Voyager to life. Packed with in-depth features on each creative department, from visual effects and art to costume and makeup, this volume celebrates STAR TREK 's epic adventure in the Delta Quadrant. Alongside production and concept art, the cast - including Kate Mulgrew and Jeri Ryan - share their personal highlights from seven seasons and 172 episodes of STAR TREK: VOYAGER . STAR TREK: VOYAGER was groundbreaking. It was the first STAR TREK show with a female captain and had the franchise's most diverse cast. It pushed the boundaries of visual effects and makeup further than ever before, and literally took the show into new territory when Voyager was stranded in the Delta Quadrant, home of the Borg Collective. STAR TREK: VOYAGER - A CELEBRATION tells the behind-the-scenes story of Voyager 's epic journey, from its earliest origins and pivotal episodes to in- depth features on writing, directing, visual effects, production art and more. The ultimate guide to the making of a television classic, based on more than 30 new interviews, featuring the nine principal cast members, including Kate Mulgrew, Jeri Ryan, and Robert Picardo, and key behind-the-scenes personnel who reveal the stories and secrets behind the show. STAR TREK: VOYAGER first appeared on TV on 16 January 1995, running for 172 episodes over seven seasons.

List of All Editions of Star Trek Voyager: A Celebration