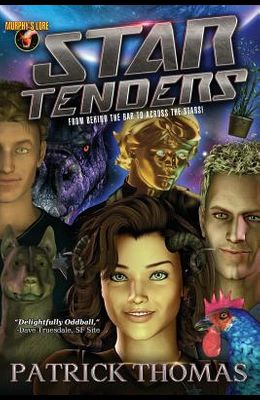 Sometime in the not so distant future... John Murphy knows a thing or two about lending a helping hand. As a bartender at Bulfinche's Pub, he's helped the troubled for years. But now a mad sea god is going to sink New York City. Nobody's going to believe it, which means millions will die. But thanks to a time traveling message and a prophecy, leprechaun Paddy Moran has gathered legends together with brave men and women to form the Startenders, a group like no other the universe has ever seen. They have built a space station and a fleet of barships and dedicated themselves to helping others. Murphy himself becomes the head honcho of the barship Fools' Glory and its crew of tricksters - Loki, Coyote, the daughter of Pan, a dragon demi-goddess, a golden melog and a sentient plant. But will even Murphy and the Startenders be enough to save the people of New York? Or prevent a genocide? Win a deadly game of spikeball? Help millions of aliens find their way home in time to spawn? Defend paradise? And most importantly, find the answer to the age old question - why did the chicken cross the galaxy? Praise for Startenders from the cast and crew: One small book for my son, one giant leap for all bookkind. -Murphy's Mom These Startenders are good eggs. -Manak Manak, the blue cosmic chicken who laid the egg that hatched the universe It beats dying at Ragnorok. -Loki, Norse trickster god Delightfully Oddball, -Dave Truesdale, SF Site Patrick Thomas is a master of combining the silly with the sublime, the over-the-top with the ordinary. His crazy comedy will have you laughing out loud, even as you sweat out yet another inescapable situation alongside his creations. His work is always original and never, ever dull, and something I always look forward to reading. -Elektra Hammond, Editor/Reviewer Buzzymag.com