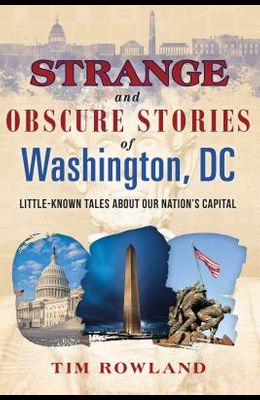 Strange and Obscure Stories of Washington, DC: Little-Known Tales about Our Nation's Capital

Strange and Obscure Stories of Washington, DC is a collection of wild but true tales about our nation's capital. Starting in the early days of the republic and reaching into modern times, the book recounts odd and humorous events that didn't make their way into the history books. Along the way the book introduces a host of memorable characters: Land speculators James Greenleaf and Robert Morris, whose financial shenanigans almost took down the Federal City before it was even established Civil War madam Mary Ann Hall, who ran the city's most upstanding brothel and died with an estate valued at $2 million The Treasury Girls--the first wave of female workers, hired to cut individual bills from printed sheets of cash (with scissors), who prompted a government investigation into immoral behavior in the workplace The NSA's secret staff of African Americans who went to work in code rooms after Harry Truman desegregated the federal workforce The 1960s activist who drew attention to a rat problem in poor neighborhoods by shuttling them in his station wagon to the toniest parts of Georgetown Readers will also find out how a hurricane saved the city in 1812, how a demonstration of the world's largest naval gun nearly killed the president, and about the tree at Washington Cathedral whose origins trace back to the Holy Land at the time of Joseph of Arimathea. With Strange and Obscure Stories of Washington, DC in hand, the city will never seem the same again.