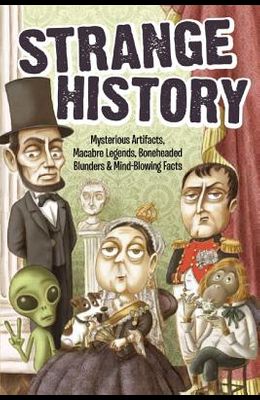 by
Bathroom Readers In Institute

Whether it's B.C. or A.D., you'll be wondering WTF This exciting title from the folks at the Bathroom Readers' Institute contains the strangest short history articles from over 30 Bathroom Readers--along with 50 all-new pages. From the 20th century to the Old West, from the Age of Enlightenment to the Dark Ages, from ancient cultures all the way back to the dawn of time, Strange History is overflowing with mysterious artifacts, macabre legends, kooky inventions, reality-challenged rulers, boneheaded blunders, and mind-blowing facts. Read about... The curse of Macbeth Stupid history: Hollywood style The secret LSD experiments of the 1960s In search of the lost Cloud People of Peru The Swedish queen who declared war on fleas Unearthing the past with the Outhouse Detectives The Apollo astronaut who swears he saw a UFO How to brew a batch of 5,000-year-old beer The brutal bloodbaths at Rome's Coliseum Ghostly soup from ancient China The bathroom of the 1970s And much, much more