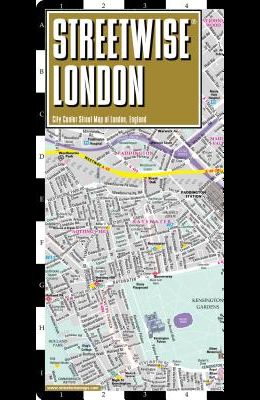 REVISED NOV 2017Streetwise London Map is a laminated city center map of London, England. The accordion-fold pocket size travel map includes a London Underground map with tube lines & stations. Cover includes: Main London City Map 1:20,000 London Underground Map - London Tube MapDimensions: 4 x 8.5 folded, 8.5 x unfolded London is one of the most popular, populated and accessible cites on earth. People love London. And why not? Londoners are charming and helpful, and their city operates on such a high dosage of civility that it could be considered an art form. London is an urban oasis where you can search out cutting edge design, cuisine, fashion, chic neighborhoods, or traditional culture. When visiting London, be prepared to walk. Whether its basic window shopping, advanced people watching, or the rewarding task of locating restaurants and museums, London is urban roaming at its best. Days can be spent just visiting London's neighborhoods, each with its own character, atmosphere and unique offerings. The STREETWISE(R) Map of London UK will enable you to go anywhere in central London. The detailed and indexed depiction of streets, tube stations, sites and hotels will enable you to spend more time making new urban discoveries than less time complaining about disorientation. Say you choose Mayfair, for its refined and cultured demeanor. Take an afternoon stroll wandering through Berkeley Square, Grovesnor Square and Green Park then finish with an espresso at Rochaux's cafe. You'll briefly feel exclusive. Wander the back alleys in Soho and you will never know what or who you'll run across. The very trendy Covent Garden is dense with human interaction packed into a small area. Walk up to Bloomsbury with its literary heritage to be amazed by the vast holdings within the British Museum. The original city of London is the square mile of the city center, now the financial center as well. Immerse yourself in history and architecture with its many fantastic buildings beginning with St Paul's Cathedral on the western edge and ending at the Tower of London to the eastside. Hike over the Thames on the Tower Bridge to see the Design Museum and the HMS Belfast. You are now on the South Bank dominated by Waterloo Station and its surrounding shopping and dining area. The London Eye will provide an interesting overhead perspective of greater London. Come back to earth and walk the Thames along Queen's walk pedestrian path and you'll be rewarded upon finding Gabriel's Wharf, the Tate Modern, the famous wobbly Millennium Bridge and Shakespeare's Globe Theatre. Walk South through Hyde Park and you encounter Knightsbridge. It is one of London's most fashionable neighborhoods, the home of Harrod's (the Vatican of department stores) and Beauchamp Place, one of London's most fashionable shopping streets. If shopping is not on the agenda, there are museums like the Victoria & Albert, the Science Museum, and the Natural History Museum. South of Knightsbridge is Belgravia. This area has long been the aristocratic section of London, rivaling Mayfair in grandeur and tranquility. Our London street map is fully indexed with streets, concert halls, hotels, museums and galleries, parks, points of interest, shopping areas and transportation terminals. A separate inset map of the London Underground, the Tube, is also included to facilitate your travel around the city. Our pocket size map of London is laminated for durability and accordion folding for effortless use. To enhance your visit to London, pick up a Michelin Green Guide London which details star-rated sites and attractions to allow you to prioritize your trip based on time and interest. In addition, for a selection of the best restaurants and hotels, try the MICHELIN Guide London. For driving or to plan your trip to and from London, use the Michelin Great Britain & Ireland Road and Tourist Map No. 713.