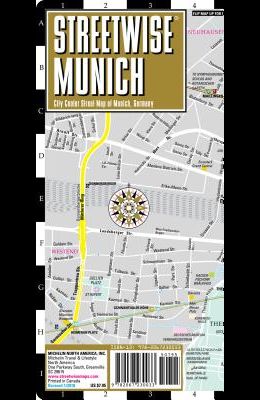 REVISED 2018Streetwise Munich Map is a laminated city center map of Munich, Germany - Folding pocket size travel map with integrated metro map including S-Bahn & U-Bahn lines & stations. Coverage includes: Main Munich Map 1:14,000 Munich Area Map 1:73,000 Munich Metro MapDimensions: 4 x 8.5 folded, 8.5 x 28 unfolded Munich, regional capital of Bavaria in south central Germany, is the second most popular destination in Germany after Berlin. The city is a center for culture and arts, with a staggering assortment of museums. It's also a fun loving, convivial, good old fashion party town known for the annual Oktoberfest. Munich is a city of contrasts. The Marienplatz is the heart of Munich and the site of its most important historic buildings. The square is dominated by the Neo-gothic Town Hall featuring its famous Glockenspiel. The Alte Pinakothek houses ones of Europe s most important art collections. In contrast is the Hofbrauhouse where beer has been swilled at this world famous tavern site since it became a royal brewery in 1605. In Englischer Garten you'll find Haus der Kunst, a popular place for art exhibits. It's located adjacent to one of the best river surfing spots in Munich (there are several): the Eisenbach River. You can stand on the bridge and watch as surfers carve turns on the icy water. The water is shallow and the water is fast, so this may not be the best place to try the sport for the first time, but it's definitely worth watching as surfers line up for a chance to test their skills on this permanent 3 foot wave. And then there is Theresienwiese, the park on the west side of town where the vast beerhall tents are pitched for Octoberfest. The main STREETWISE(R) map of Munich covers the central city in detail and contains all important sites, architecture, metro stations and parks. Also provided is an inset map which features Munich s metro system and fare structure. This Munich map will enable you to navigate your way to Nymhenburg Palace or Olympic Park, both of which are outside the center city. A Munich Area map, which guides you in, out, and around Munich, is helpful in finding the Munich International Airport and other out of town sites. Our pocket size map of Munich is laminated for durability and accordion folding for effortless use. To enhance your visit to Munich, check out the Michelin Green Guide Germany which details sites and attractions using the famed Michelin star-rating system so you can prioritize your trip based on your time and interest. For a selection of the best restaurants and hotels, buy the red MICHELIN Guide Main Cities of Europe. To plan your trip to and from Munich, use Michelin Germany Map No. 718.