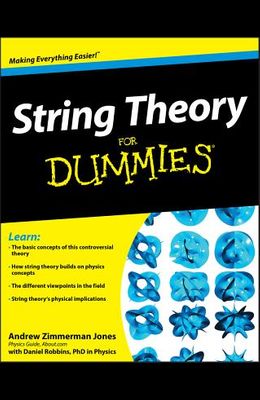 A clear, plain-English guide to this complex scientific theory String theory is the hottest topic in physics right now, with books on the subject (pro and con) flying out of the stores. String Theory For Dummies offers an accessible introduction to this highly mathematical theory of everything, which posits ten or more dimensions in an attempt to explain the basic nature of matter and energy. Written for both students and people interested in science, this guide explains concepts, discusses the string theory's hypotheses and predictions, and presents the math in an approachable manner. It features in-depth examples and an easy-to-understand style so that readers can understand this controversial, cutting-edge theory.

From the Back Cover Learn: The basic concepts of this controversial theory How string theory builds on physics concepts The different viewpoints in the field String theory's physical implications Your plain-English guide to this complex scientific theory String theory is one of the most complicated sciences being explored today. Not to worry though! This informative guide clearly explains the basics of this hot topic, discusses the theory's hypotheses and predictions, and explores its curious implications. It also presents the critical viewpoints in opposition to string theory so you can draw your own conclusions. Understand the theory of everything -- grasp the key concepts and importance of the theory, and learn why scientists are so excited about finding a theory of quantum gravity It all comes down to physics -- discover how string theory is built upon the major scientific developments of the early 20th century Building the theory -- trace the creation and development of string theory, discover its predictions, and see whether accurate conclusions can be made Take string theory for a spin -- explore the core issue of extra dimensions, the implications for cosmology, and how string theory could explain certain properties of our universe Boldly go where no one has gone -- see what string theory has to say about possible parallel universes, the origin and fate of our universe, and the potential for time travel Hear from the critics -- listen in on the heated debates about string theory and weigh the alternatives being offered Open the book and find: The questions string theory attempts to answer Easy-to-follow examples Explanations of Einstein's theory of relativity, quantum theory, and particle physics The successes and failures of string theory Fascinating bits of string theory including strings and branes Ways that string theory can be tested Discussions of loop quantum gravity and other possible alternative theories of gravity How the theory may relate to cosmic mysteries, from the origin of matter to black holes