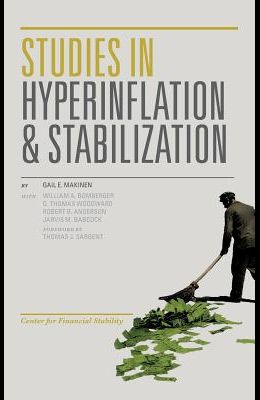 Studies in Hyperinflation and Stabilization

Gail produced a sequence of fascinating studies that succeed in coaxing orderly patterns and basic macroeconomic forces at work in the midst of what at first glance seems to have been chaos. - From the foreword by Thomas J. Sargent, co-recipient of the 2011 Nobel Prize in Economics The often terrible economic and political costs of hyperinflation have made it a topic of enduring interest for economists and public alike. In this book, Gail Makinen and his coauthors examine 20th century hyperinflations in China, Greece, Hungary, and Taiwan, plus high inflations in South Korea and South Vietnam. How did they happen? What were the consequences? How did they end? By pulling the episodes together, the book throws light on common patterns of error and success in dealing with hyperinflation. In the preface and the postscript, the authors discuss the lessons of these episodes and whether hyperinflation is a realistic possibility in the leading economies today. ABOUT THE AUTHOR AND COAUTHORS Gail E. Makinen is Adjunct Professor at the Georgetown McCourt School of Public Policy. Previously he was a Specialist in Economic Policy at the Congressional Research Service of the Library of Congress and Principal Macroeconomist for the General Accounting Office in Washington, D.C. William A. Bomberger is Associate Professor of Economics in the Warrington College of Business at the University of Florida. G. Thomas Woodward, now retired, was most recently Assistant Director for Tax Analysis with the Congressional Budget Office in Washington D.C. The late Robert B. Anderson was formerly a macroeconomist at the Office of Management and Budget in Washington, D.C. The late Jarvis M. Babcock taught economics at Oberlin College.