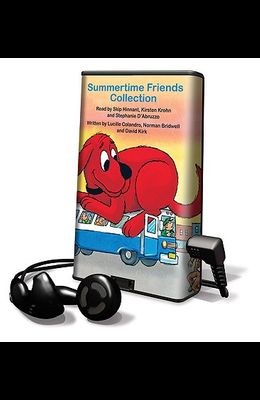 There Was An Old Lady Who Swallowed a Shell There was an old lady who swallowed a shell. I don't know why she swallowed the shell. She didn't tell. You won't believe why this old lady swallows a shell, a crab, a fish, a gull, a pail, some sand, and a wave But watch out when she burps, with hilarious results Clifford Takes a Trip Summer vacation means one thing - more time for Emily Elizabeth to play with Clifford Until this summer, that is. Emily Elizabeth's family is going far away, so far that Clifford can't come. Or can he? Follow along as Clifford sniffs, swims, and tiptoes to find Emily Elizabeth - just in the nick of time. Miss Spiders Tea Party What's a sociable spider to do? All Miss Spider wants is to invite some friends to tea. But the other bugs are afraid of her Readers of all ages will cheer for the gracious and beloved arachnid during her gentle and rewarding search for friends. Cliffords Pals Clifford and his pals just can't stay out of trouble, but that's what they get for playing around a construction site Though Clifford ruins a wrecking ball and bashes in a bulldozer, he also saves his friends from wet cement and a boulder avalanche. After a full day of mischief, Clifford and his pals decide that next time they'll play somewhere safe, and a lot more fun.

There Was an Old Lady Series In Order - By Lucille Colandro