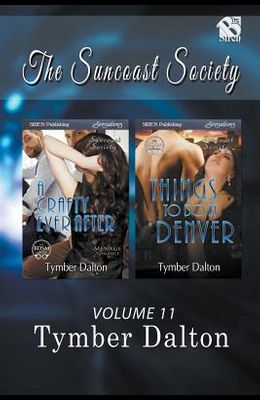 Suncoast Society, Volume 11 [a Crafty Ever After: Things to Do in Denver] (Siren Publishing Sensations)

A Crafty Ever After Siren Sensations: Contemporary Consensual BDSM Menage a Trois, M/M/F, with M/M elements, spanking, sex toys, HEA] Following Cali's health scare, Sean and Max have played the double-Dom card and put their feet down. She will marry one of them so she'll finally have good health insurance. They don't care which one. Except when Cali can't choose between them, she leaves the decision in their hands. And because life is never boring with Sean and Max, they can't do anything the easy way. Where's the fun in that ? Now the two crafty bastards have yet another trick up their troublemaking sleeves to keep their beloved wife on her toes. So how long, exactly, can the men conceal the groom's true identity from their bride? Things to Do in Denver Siren Sensations: Contemporary Consensual BDSM, bondage, paddling, sex toys, HEA] Tony Daniels has a high-stress job running the data center for Asher Insurance. When he's sent to Denver to supervise building their new facility, it completely takes over his life, including stealing valuable time and attention from wife and slave, Shayla. Shayla doesn't like having to spend time apart from her husband, but she's a big girl with a job of her own. Still, it would be nice to actually spend their wedding anniversary together. And that gives her an idea... But then Tony receives an unexpected phone call, and his past moves to darkly intrude on and overshadow his already thinly stretched present. Sadist doesn't mean soulless. Except now it also means asking something of his wife she has every right to refuse. Will this new weight draw them closer, or will their already dangerously stressed dynamic split apart at the seams?