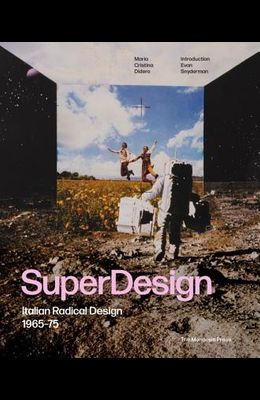 by
Maria Cristina Didero and Evan Snyderman and Deyan Sudjic

SuperDesign charts the Italian Radicals' bold experimentation in modern design from its birth through its continued influence on design today. Radical Design was launched by art, architecture, and design students in Italy in the mid-1960s. What started as a youthful rally against the establishment and a rejection of design norms became a movement that brought together some of the most dynamic and avant-garde thinkers and makers across the country. Through enigmatic, confrontational, and clever furniture and objects--such as the iconic lip-shaped Bocca sofa, or the Cactus coat-rack in green foam--as well as more public innovations including discotheque interiors and subversive performances, the Radicals projected design's new era as equal parts Pop Art, play, Surrealism, and futurism. Told through exclusive interviews, unreleased photographs, original drawings and artwork unearthed from personal archives, and newly commissioned photography of rarely seen works, SuperDesign explores this fervent period of design that played out against the era's social and political turmoil. Featured designers include Archizoom Associati, Lapo Binazzi (UFO), Pietro Derossi (Gruppo Strum), Piero Gilardi, Ugo La Pietra, Gaetano Pesce, Gianni Pettena, Studio65, and Superstudio. The culmination of a decade of collecting and researching original examples of some of the most important and iconic works of the period, SuperDesign offers a unique new introduction to the legacy of the Italian Radicals.