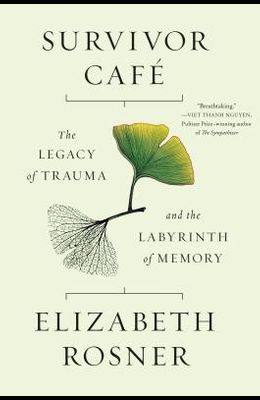 Survivor Café: The Legacy of Trauma and the Labyrinth of Memory

As featured on NPR and in The New York Times , Survivor Cafe is a bold work of nonfiction that examines the ways that survivors, witnesses, and post-war generations talk about and shape traumatic experiences. As firsthand survivors of many of the twentieth century's most monumental events--the Holocaust, Hiroshima, the Killing Fields--begin to pass away, Survivor Cafe addresses urgent questions: How do we carry those stories forward? How do we collectively ensure that the horrors of the past are not forgotten? Elizabeth Rosner organizes her book around three trips with her father to Buchenwald concentration camp--in 1983, in 1995, and in 2015--each journey an experience in which personal history confronts both commemoration and memorialization. She explores the echoes of similar legacies among descendants of African American slaves, descendants of Cambodian survivors of the Killing Fields, descendants of survivors of the bombing of Hiroshima and Nagasaki, and the effects of 9/11 on the general population. Examining current brain research, Rosner depicts the efforts to understand the intergenerational inheritance of trauma, as well as the intricacies of remembrance in the aftermath of atrocity. Survivor Cafe becomes a lens for numerous constructs of memory--from museums and commemorative sites to national reconciliation projects to small-group cross-cultural encounters. Survivor Cafe offers a clear-eyed sense of the enormity of our twenty-first-century human inheritance--not only among direct descendants of the Holocaust but also in the shape of our collective responsibility to learn from tragedy, and to keep the ever-changing conversations alive between the past and the present. Survivor Cafe --which combines moving personal narrative with illuminating research into the impact of mass trauma on a personal and cultural scale -- feels like the book Rosner was born to write. Each page is imbued with urgency, with sincerity, with heartache, with heart. -- San Francisco Chronicle