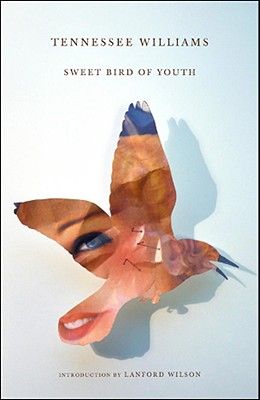 by
Tennessee Williams and Landford Wilson

The acclaimed classic in a new edition, now with an insightful new introduction, the author's original foreword, and the one-act play, The Enemy: Time, on which Sweet Bird of Youth was based. Sometime actor and full-time male hustler Chance Wayne returns to the Gulf Coast town of St. Cloud in an attempt to retrieve his lost innocence by reuniting with his high school girlfriend, Heavenly Finley. But Chance arrives there with his current employer, the drug-addicted, over-the- hill movie star, Alexandra Del Lago, who uses Chance, teaches him to use others, and doesn't intend to let him go. Chance learns that when he left St. Cloud years before, he left Heavenly with a crippling venereal disease. Heavenly's brother and her father--the powerful Boss Finley, a politician who has been responsible for local lynchings--have marked Chance as a criminal degenerate and plan to castrate him. Williams knew how to tell a good tale, and this gritty and wrenching play also reveals the dark side of the American dreams of youth and fame by implicating small town injustice, systemic racism, and the depth of suffering that results from personal and public corruption.

From the Back Cover The very title of Sweet Bird of Youth is one of ironic pity. The two chief characters--a raddled has-been actress from Hollywood, seeking to forget her present in drugs and sex, and her still handsome masseur-gigolo, who has brought her to his hometown in the South, believing that through her money and faded glamor his gaudy illusions may yet come true--are the reverse side of the American dream of youth. Yet as they work out their fate amid violence and horror, there is nevertheless a note of compassion for the damned.