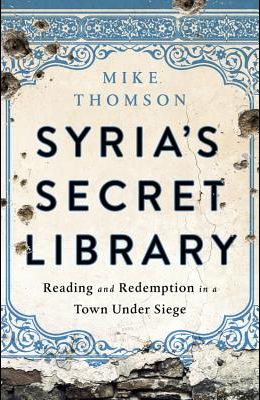 Syria's Secret Library: Reading and Redemption in a Town Under Siege

The remarkable, improbable story of a small, makeshift library in the Syrian town of Darayya, and the people who found hope and humanity in its books during the four-year siege they endured. At the height of the Syrian Civil War, deep beneath the shattered streets of rebel-held Darayya was a secret library. This basement room filled with thousands of books, rescued under constant sniper fire from gutted buildings, was an oasis of normality in a country at war with itself. Here, despite a devastating four-year siege, people risked their lives to read. Over a period of more than a year, Mike Thomson heard their extraordinary stories via tenuous Skype calls, emails, social media messages and audio diaries recorded on their mobile phones. Through the testaments of these clandestine readers, a portrait of a unique rebel enclave emerges, and with it, a richer understanding of their embattled country. Syria's rich literary history has been overshadowed by recent turmoil. But Darayya's hidden collection is a testament to the Syrian people's long, unbreakable pursuit of knowledge, enlightenment and beauty, even in their darkest hours. When Darayya fell in the summer of 2016, it was the end of the secret library but not the courageous spirit of those who built it. This is a story of hope amid the despair, a glimmer of light in a country long cloaked in darkness.