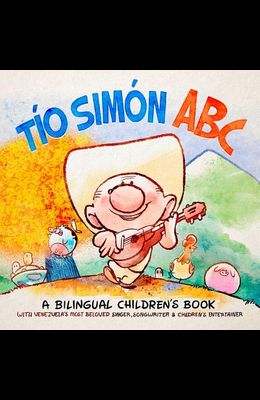 Bilingual ABC book using images from Venezuela and Latin-American folklore featuring beloved Venezuelan personality T o Sim n In this beautiful book, T o Sim n--beloved Venezuelan folk musician and children's TV personality--will teach you words of every letter in both English and Spanish Children will be able to learn with T o Sim n about his home, Venezuela, as well as Latin American food, places and nature with a beautiful full-color illustration on every page that will spark joy in families of every kind. For every book sold, the publisher will donate $1 to Venezuelan children charities. Sim n D az, a.k.a. T o Sim n, has been a cultural fixture for Venezuelan and Latin culture worldwide from the 1960s. His children's TV show, Contesta por T o Sim n, aired for a decade, and its messages and popularity earned him the unofficial title of the Mr. Rogers of Venezuela.His music has beencovered more than 200 times in a dozen languages, and Diaz is a known influence on artists such as Julio Iglesias, Pl cido Domingo, the famous Spanish director Pedro Almod var and The Gipsy Kings. He was awarded a lifetime achievement Grammy from the Latin Grammys in 2008. Features a foreword about his life and legacy by T o Sim n's (Sim n D az) daughter Bettsimar D az.