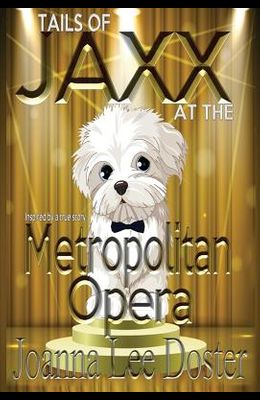 Tails Of Jaxx At The Metropolitan Opera

Meet Jaxx, a happy-go-lucky New York City dog, whose life is suddenly turned topsy-turvy when he gets lost during a blizzard. Wrenched away from his human family, alone, shivering and struggling to survive, he is rescued and taken in by strangers at The Metropolitan Opera. Follow Jaxx, as he tells his story while bravely coping with the challenges of adapting to living in an unfamiliar environment inside the opera house. He meets a lively cast of colorful characters, including other animals, but longs to be reunited with his family. He performs heroic deeds and encounters situations that are filled with surprises, both good and bad. Root for Jaxx, as he fulfills his new dream of performing on stage at The Metropolitan Opera. This inspirational tale, with its rich language and an introduction to French, is an ideal first chapter book for developing readers. It provides children with a rare peek into the thrilling world of The Metropolitan Opera, while demonstrating that live theater and performing on stage can be a fun and exciting experience. Tails Of Jaxx At The Metropolitan Opera instills valuable lessons about courage, hope, and making friends in new situations. Most of all, it underscores the importance of striving to conquer things we didn't think we could do. Ages 6 to 9