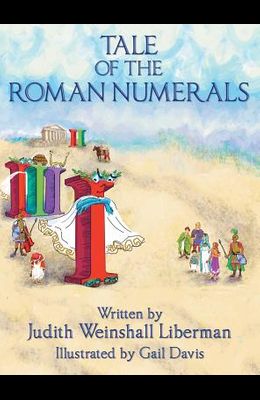 Tale of the Roman Numerals

ABOUT THE BOOK TALE OF THE ROMAN NUMERALS teaches the reader, young or old, the basics of the Roman numeral system, a way of writing numbers which was used in the Roman Empire for centuries and which is still used for various purposes in the West today. The amusing story and the colorful illustrations in TALE OF THE ROMAN NUMERALS make mastering the fundamentals of the Roman numeral system both easy and fun. ABOUT THE AUTHOR Born in Israel (then called Palestine), Judith Weinshall Liberman came to the United States in 1947 to pursue higher education. She earned four American university degrees including two in law, a J.D. from the University of Chicago Law School and an LL.M. from the University of Michigan Law School. After settling in the Boston area in 1956, she studied art and creative writing. Beginning in the early 1960s, and for four decades thereafter, Ms. Liberman created numerous series of artworks. Her art has been widely exhibited, and is represented in the collection of museums and other public institutions. During her long career in visual art, Ms. Liberman wrote several books, among them some picture books. Her book THE BIRD'S LAST SONG (Addison-Wesley, 1976), which she also illustrated, won a citation as one of the fabulous books of the year. Since 2012, she has published several additional picture books, including ICE CREAM SNOW, THE LITTLE FAIRY, COLOR IN OUR WORLD, THE VERY OLD PAINTER AND HER HUSBAND, HAIFA, ANGEL'S PUPPIES, THE GIANT HOUSE, THE BEE AND THE BUTTERFLY, THE MOUNTAIN, THE TUNNEL, THE OLD DOLL, THE LITTLE SONGBIRD, FIFTEEN FABLES, TWELVE MORE FABLES, THE BIRD WHO WENT TO HEAVEN, A PARAKEET FOR ERIC, TALES OF HUMAN FOIBLES, IN THE MILITARY CEMETERY, THE GIRL AND THE PIGEONS, MORE TALES OF HUMAN FOIBLES, MICHAEL AND THE FLAG, WHAT WILL I BE?, IF I HAD THE POWER, IF I WERE RICH, LUCY AND THE SNOWMAN, THE WHIRLPOOL, and THE LETTERS OF THE ALPHABET. Judith Weinshall Liberman's archives can be found in the Arts Department of the Boston Public Library and at the Smithsonian Archives of American Art. ABOUT THE ILLUSTRATOR TALE OF THE ROMAN NUMERALS is the nineteenth book on which Judith Weinshall Liberman, the author, has collaborated with Gail Davis, the illustrator. Since Ms. Liberman did not feel that, in light of her deteriorated eyesight, she could do justice to illustrating TALE OF THE ROMAN NUMERALS herself, she selected a fine artist, Ms. Gail Davis, to create the illustrations under the author's guidance. The two had previously collaborated on THE LITTLE FAIRY, on THE VERY OLD PAINTER AND HER HUSBAND, on ANGEL'S PUPPIES, on THE GIANT HOUSE, on THE MOUNTAIN, on THE TUNNEL, on THE OLD DOLL, on FIFTEEN FABLES, on TWELVE MORE FABLES, on A PARAKEET FOR ERIC, on TALES OF HUMAN FOIBLES, on IN THE MILITARY CEMETERY, on MORE TALES OF HUMAN FOIBLES, on MICHAEL AND THE FLAG, on IF I HAD THE POWER, on IF I WERE RICH, on THE WHIRLPOOL, and on THE LETTERS OF THE ALPHABET. In the present book, Ms. Davis creates amusing characters that express the spirit of the story and are sure to capture the reader's imagination.

Frequently Asked Questions About Tale of the Roman Numerals

0
|   0  reviews
Did you read Tale of the Roman Numerals? Please provide your feedback and rating to help other readers.
Write Review

List of All Editions of Tale of the Roman Numerals