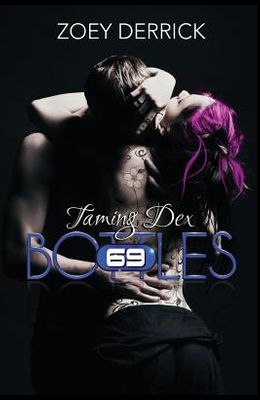 Book #4 in the 69 Bottles Series
by
Zoey Derrick

Taming Dex is Book #4 of the 69 Bottles Series and stands alone from Books 1-3. Taming Dex is Book 1 in Dex and Raine's Story. Book 2 to be released Summer 2015 Dex Harris, Drummer for America's Hottest Alternative Rock Band 69 Bottles, has never gone looking for love-for good reason. After an ill-fated night after a tour stop in Phoenix, his wicked demons resurface. Is he strong enough to resist falling back into the black hole that was once his life or will he let addiction consume him? Raine Montgomery has worked for Bold International, Inc since she moved to California at eighteen. She's fought her way into the executive offices as an assistant to CEO Cami Michaels, but being an assistant isn't what she imagines doing for the rest of her life-so when Cami sends her to assist with the 69 Bottles tour, she jumps at the opportunity. There's only one kink in that plan-and his name is Dex Harris. Raine doesn't expect to be on the radar of the sexy manwhore drummer, let alone the center of his sights. Shattered from a long-term relationship with a cheater, Raine is determined to make Dex prove himself. Will Dex toss away his one-night stands in favor of sleeping every night with only one woman-or is Raine simply his latest conquest? A Rock Band. A Tour Bus. One Wild Ride.... **Content Warning** This books if full of crazy Alpha-male, drummer who loves women. It also contains sexual acts, content and otherwise erotic adventures between a Man and a Woman, however, there might be a little M/F/M action too. The author is not responsible for panty washing or changing, boyfriend/husband/significant other breaking, or the events that may cause you to read one handed. This story may also contain certain discussion of drugs, drug addiction, alcohol, alcohol addiction and other serious things.