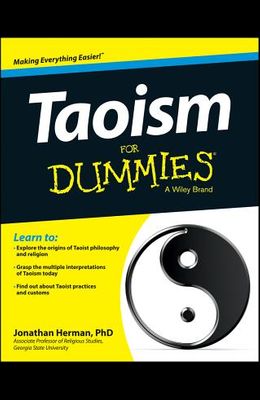 Part of the Dummies Series
by
Jonathan Herman
$12.85
Select Format

The definitive guide to understanding Taoism--no matter your background or faith Lao Tzu's Tao Te Ching is the second most translated book in the world, and the practice of religious Taoism is on the rise in China, where adherents currently number in the hundreds of millions. Yet there remains a remarkable lack of reliable information about Taoism for curious westerners. Taoism For Dummies provides comprehensive coverage of Taoism's origins in China's Chou Dynasty, its underlying quietist principles, its emergence as a major religion, various interpretation of its core texts, including both Eastern and Western interpretations, key Taoist concepts, and much more. It also provides a fascinating glimpse of Taoism in contemporary China. The ideal guide for readers interested in this influential religion, as well as those taking an introductory course on Taoism or Chinese Religion A valuable source of insight for those with an interest in modern Chinese culture and beliefs

From the Back Cover Learn to: Explore the origins of Taoist philosophy and religion Grasp the multiple interpretations of Taoism today Find out about Taoist practices and customs The friendly guide to understanding the rich history and modern practice of Taoism! Exploring the philosophy, practices, and scriptures of one of the world's major religions -- and one of the oldest -- Taoism For Dummies provides a comprehensive introduction to this fascinating and influential religious tradition. Whether you're a student of religion or just curious about Taoism, this fun and friendly guide explains in plain English the fundamental concepts of Taoism, explores in depth the origins and multiple interpretations of the religion, and goes into detail about what it means to be a Taoist. Start with Taoism 101 -- learn the fundamentals and debunk the main myths about Taoism Follow the evolution of Taoism -- find out how Taoism has developed from Classical Taoist philosophy to institutionalized religion to western Taoism Unlock important Taoist concepts -- explore the Tao, yin and yang, and wu-wei Learn about the many texts of Taoism -- delve into the Tao Te Ching, as well as other texts from the rich body of Taoist scriptures Explore Taoist practices -- find out how followers bring Taoism into their daily lives Open the book and find: The origins of Taoism Taoist attitudes toward life The life and teachings of Lao Tzu and Chuang Tzu Types of Taoism in China and the West today How to understand the Taoist concept of doing everything by doing nothing A look at the Taoist practices of alchemy, meditation, t'ai-chi, and martial arts Advice on acquiring Taoist wisdom Ten common misconceptions about Taoism